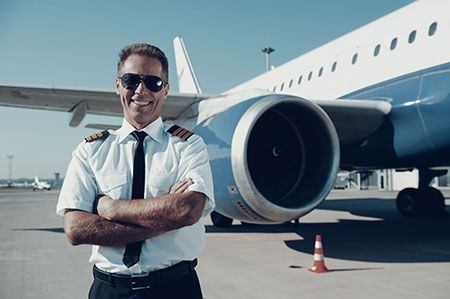 To fly air charter, a pilot must obtain a commercial pilots license, an instrument rating and a multi-engine rating. They must also have a minimum of 1,200 hours of pilot-in-command experience. However, insurance companies dictate how many hours are needed and they typically require a minimum of 2,500 hours of pilot-in-command time, even for light twin engine aircraft. As the aircraft becomes more complex, the minimum hours required by the insurance companies usually increases substantially.

Once a pilot is hired, he or she receives a minimum of 5 to 10 hours of in-flight training which covers every possible emergency that can occur in their assigned aircraft. They will also be required to take an oral and written examination as well as a flight check-ride, during which they must demonstrate their abilities to an FAA examiner or an FAA designated check airman. These flight checks are very demanding and can be failed. This process is repeated every six months and continues as long as the pilot flies for hire.

The amount of time that a pilot is on duty is highly regulated. The following is a synopsis of the rules.

8 hours in a 24 hour period. This can be increased to 10 hours with the use of a co-pilot.

12 hours in a 24 hour period. However, once the aircraft lands in the United States, the 8 hour rule takes precedence.

14 hours in a 24 hour day. This includes pre-flight and post flight of the aircraft.

If a pilot is able to have 10 hours of rest in-between flights, the flight time clock resets to zero. Again, the rule is a maximum of 8 hours in a 24 hour period. If a pilot flies beyond the 8 or 10 hour limit due to unusual circumstances such as severe weather, the rest period requirement increases to 16 hours. Also, a pilot can only fly six consecutive days before they are required to be off-duty for 24 hours.

Each air charter operator will write their own operations manual for internal use. In this manual, they describe in detail how their air charters will be operated. Using the published FAA standards as a minimum requirement, they may elect to reduce the number of hours a pilot can fly or increase the number of hours of mandatory rest. Once these changes are published in their operations manual, they become a part of the Federal Aviation Regulations with which the air charter operator must comply.